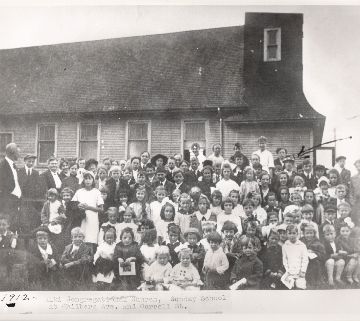 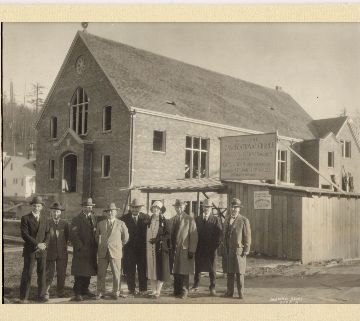 In 1905, the first Sunday School session was held in the Baker Cottage at Spring Hill (now Beach Drive).

In 1907, Alki became the host of a portable day school from the county school system at Chilberg and Carroll.

On Easter Sunday April 11, 1909 the formal organization of the little church at South Alki was completed, naming themselves The Alki Congregational Church of Christ In Seattle.

From “Til Time be Conquered:” From its very beginning, Alki Church had been the social center of the permanent community. Throughout the records there is mention of one social activity after another — singing, lessons in “self‐expression and poetry, minstrel shows, plays, young people’s parties, luncheons by the Alki Women’s Improvement Club, as well as various affairs the Ladies Aid continually put on to raise money. In addition, the church was the Headquarters in those early days of the volunteer fire department.

Construction of the new building started June 1, 1958 and then on October 12 of that same year, Alki Congregational Church celebrated the completion of its expansion project by dedicating a new sanctuary standing next door to the 1926 church building.

In 1963, the Social Action Committee of Alki Church had been reactivated in time to sponsor a community meeting on Open Housing to help voters make an informed judgment on Open Housing Ordinance (access for all citizens to fair housing without discrimination). As a direct result of their work, the following resolution on racial justice was adopted at a church membership meeting:

“We the members of Alki Church, reaffirm our conviction that all forms of racial discrimination are contrary to the basic principles of the Christian faith. We hold that Christ’s redemption of mankind is for every individual, and that each person is of equal worth in the sight of God. Any denial to another of his God‐given rights is not only unjust according to the standards of democracy, but it is sinful according to the standards of Christian conduct derived from the Scriptures.”

Then in 1967, our church would receive most of the credit for establishment of the Family Counseling Center in our community, sponsored by The West Seattle Council on Youth Affairs (WESCOYA).

In 1980, under leadership provided by many members of Alki Church, the West Seattle Food Bank is incorporated and begins serving the community, as well as The West Seattle Helpline.

1982 the Neighbors for Peace began at Alki Church

1998 Alki Church voted to become “Open and Affirming.” All people are welcomed at Alki Church regardless of gender or sexual expression.

In 2006, Alki UCC joined a network of churches throughout the area to host homeless families for one week a quarter through a nonprofit program called Family Promise.

In 2009  the congregation collaborated to create and adopt a Mission Statement:

with each other and the world.

In 2010,  Alki UCC joined other westside faith communities to create the Westside Interfaith Network (WIN), committed to providing mutual aid throughout the area, focused on food insecurity and homelessness.

Alki UCC received a grant in 2015 to participate in Seattle University’s Faith and Family Homelessness Program, a multifaith study and action group working to educate the community about and find ways to eliminate homelessness. We branded our program “Homeward Bound.”

At one of our extravagant fundraisers, Alki UCC raises $21,000 to build tiny houses in 2017 for people experiencing homelessess. Ultimately, led by members of Alki UCC, $80k is raised to build 30+ tiny houses at Camp Second Chance in south West Seattle, building through 2019.

In 2020, Alki UCC completes discernment after the retirement of a longtime pastor  and begins to create our Future Story with the formation of new ministry teams, conversations about the future of Alki UCC and how we can support the wider community.